Find our more about this community driven garage arcade 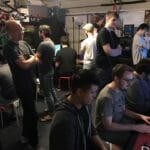 Local events thrive on community support and *69 gArcade Weeklies is a testament to that truth. Rob Nava reveals to us his humble beginnings that started with one man’s passion and how it grew to be a solid weekly gathering.

What’s the story behind this event?

I’ve been playing Street Fighter since the original and really got into Street Fighter II like so many others. Then I kind of stopped playing in the late 90s and missed out on Street Fighter III. Right before the release of Street Fighter IV, I decided to get back into it and wanted really get better and play with people other than my close friends and family. I put out an ad on Craigslist for people looking for SFIV practice, met a guy, and went over to each other’s houses a couple of times. He invited his friends and they invited their friends and it became a weekly occurrence at my house. After a while, my entire first floor had permanent and semi-permanent setups strewn about. After about a year of that, I found someone in Dallas that was building wooden Japanese style arcade cabinets. I ordered one and when I went to go pick one up, I came back with 4! Since there wasn’t much room left in the house, the entire gang helped clean out my garage and we converted it into the *69 gArcade (garage arcade.) We have been having weeklies for all kinds of fighting games ever since. That was almost 10 years ago! Now we mainly use Facebook and Discord to communicate. I am in transition and sold my old house, and am currently in a rental, so everything is in the living room now. It’s pretty crazy but I am thankful that I have a very understanding girlfriend! This fall the *69 gArcade will move into its new permanent home just down the road. Looking forward to another 10 years (and more!)

It is 100% free and community run. We are open to new players and welcome anyone that loves to play. Everything is done for the love of the FGC. We currently have no sponsorships (though I’m not opposed to it). Occasionally, someone will donate a disc or some money but 99% of the folks that come through here play for free. It’s reliable and dependable and we have been going on for years. We also have lag free monitors and cabinets that have the Vewlix layout with Sanwa controllers built into the cab and the ability to plug in your own controllers as well. We used to be able to stream but we haven’t been able to in the rental that I’m in. But that’s returning this coming fall!

My favorite moment is probably holding our first tournament on the grand opening of the gArcade. People put in a lot of time and effort to make that happen. Together, we took a garage full of crap and turned it into an amazing place for people to play. People came every weekend for about a month to help move things in and out. They helped paint, wire up things, put in carpet, and clean. And they donated equipment, money, games and their time. It was amazing.

You can also check out all our “Opening Day” tournaments: USFIV, MKX, and ST with this YouTube search!

There are a lot of amazing people involved with *69 gArcade. But if I had to choose some standouts, they would be Taylor Rodes (my best friend) and Carl Clark. Taylor basically runs the place when I can’t. He’s helped from the beginning and he’s very involved in the local fighting game community. And Carl, although currently on “baby sabbatical”, has been an advocate for Killer Instinct through thick and thin. Well, maybe there was never a really thick part for KI (lol), but I have never met a friendlier person that was so dedicated to growing his game on a grassroots level.

Where did the name *69 Dojo come from?

When I first moved to Austin in 1999, Quake 3 was a big thing for PC gaming. I had dabbled in Quake 2, but when Quake 3 came out, I got into it pretty hardcore. There was a local LAN tournament in Austin called “IRQ Conflict” (the Q was stylized to look like the Quake “Q” logo.) The best players from the Austin Area (and some even from other parts of Texas) would gather there several times a year.

At the first tournament I went to I think I placed 5th or 6th in Quake 2. I didn’t do that great but I played well enough to get noticed by the locals. One of the locals, Josh, decided that he should form a Quake 3 clan comprised solely of Austin players. Nobody could agree on a name so Josh just used his old Quake 1 clan name, which had been dissolved by now. Since nobody cared, we just went with it: *69.

For a while, none of us in the clan even knew why it was called *69. Eventually I asked Josh why he’d chosen the name *69. The story wasn’t that inspiring. He told me that he had hastily formed a clan for a tournament and he needed a clan name for registration. In true Brick Tamland fashion, Josh simply looked around the room for inspiration. He saw a refrigerator magnet that was advertising a phone service, *69, and just used that.

Many of you younglings might not know this, but back then, when people had home land-line phones, you could add features to your service like call waiting, caller-id and last-call-return. These were not included in your regular phone service. The last-call-return service was accessed by dialing *69 on your phone. It would simply call back whatever number last called you. So if you had someone that’d call you and hang up on you, you could dial *69 and call them back without knowing their number and go, “Hey, asshole! Why’d you hang up on me!… Oh!… Sorry, Mom! I didn’t know it was you. Oh, the cat unplugged your phone as I answered? No, I’m fine. Sorry I haven’t called.” The funny thing is that some people thought that by naming ourselves *69 that we were saying, “If you frag us, we’ll frag you back!” Ha! If only we’d have been that clever…

So, in short, Josh had this GTE (not even AT&T, hmph) magnet reminding him of the *69 service, and he simply chose that for the clan name kinda randomly. And the dojo part? Ever since being part of that clan, people would come over to practice Quake. I’d host many, many LAN parties over the years. And since my clan was called *69 and we practiced at my place all the time, people starting calling my house the *69 Dojo.

The name stuck with me and anytime I couldn’t come up with a better name for something, which is almost always, I just name it s69 or STAR69 or *69. The end.

Check out when the weeklies happen more details about *69 gArcade Weeklies here!

You can also check out their Facebook page and Discord channel!