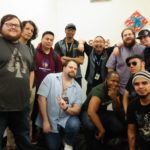 Growing up, my mom’s favorite holiday was Thanksgiving. She believed in the importance of friends and family coming together. This belief extended beyond our Thanksgiving table.

During the season, our family volunteered for the Denver Rescue Mission. The very same charity Focus Attack Donate Cans supports today. From donating turkeys to Denver Rescue Mission’s annual drive to personally waiting tables during the Thanksgiving feast for the distressed, my mom taught me the importance of family, friends, and a full dinner table.

Fast-forward to 2012, the Colorado FGC lacked a proper regional event. As the FGC grew and I became more involved, I began to realize these nerds were like a second family to me. Then it hit me: A way to bring together my love for Thanksgiving and my “family”, the FGC. To have fun and come together for a great cause. From there, FADC was born.

Despite being one of our more popular events, it’s not a competitive one! The comradery in coming together creates a low-stress, relaxed event where attendees are looking to do good, rather than BE GOOD.

We help those in need by requesting canned goods for entry fees, instead of cash. Any cash that is donated, either by opting $1 to replace a canned good or anyone viewing the stream, goes to buying turkeys. Those turkeys are then donated to the Denver Rescue Mission. Prizes are all out-of-pocket; 0% of the event operations are recouped and every bit earned goes to charity.

Prizes are provided by generous members of community, sponsors, and the FADC TO’s. Community members are now supporting the event in their own ways, with bake and snack sales, photography, art assets, and providing venues for FADC.

Where can we find out more about your scene?