May Revealed for Guilty Gear at Toyko Game Show 2019 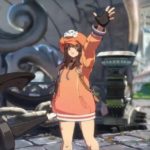 A new trailer was revealed at the Tokyo Game Show with more footage of Ky and Sol going at it. Arc System Works has really stepped up the game’s visuals and dynamic camera work.

They also briefly revealed the next confirmed character, May of the Jellyfish Air Pirates will be swinging her anchor once again. She seems to be donning a full on sweater with an oversized caddy hat giving her a bit of a younger look.

The next trailer is announced to be at CEOtaku, Sept. 27-29.

Check out the full trailer below: