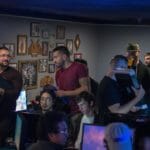 Local events are the lifeblood of the Fighting Game Community. Not every event has the biggest spotlight on them, but they all help to keep the community alive and breed the next generation of champions. So we have the pleasure to feature SLC Bar Fights run by Thomas Winkley who told us more about his scene in Salt Lake City, Utah.

Utah is largely underrepresented in fighting games but we actually have a really solid and dedicated player base. Known players in Street Fighter like 801iPeru and 801Strider have given us recognition and we’ve had players get top 8s in various anime fighters. We have some amazing Soul Calibur VI and Mortal Kombat players here as well. I wanted to start building consistency to get everyone playing more so I started working on Barfights. I figured combining fighting games and drinking was an easy marriage and Quarters Arcade Bar is a super supportive crew that wants to build local communities. We already had one long-running monthly called The Salt Lake Skirmish run by LanaDelMaek (it’s held in a legit boxing gym which is super fun) and we also have another one about 1 hour south that’s a monthly. There was definitely room for more and we wanted to encourage playing weekly, consistently to get that competitive edge players need.

I think Barfights stands out in that its held in a legitimate arcade. There are plenty of drinks, the competition is fierce, and those in the venue get super hype. We’ve had really solid sponsorships month to month from various local companies ranging from amazing local and national breweries and liquor groups. It’s also notable as it’s part of the “Best of Salt Lake” tour that we’ve put together. It’s pretty similar to the Capcom Pro Tour but focused on improvement. Players receive points for winning matches not just sets and we give bonus points to top 8. In November, we’ll be having the top 7 point holders and the winner of our last chance qualifiers fight against each other for the “Best of SLC” title.

What are some of your favorite moments?

I’ve had a few favorite moments of mine so far. I think the most notable ones was one of our Utah players NVRMND pushing 801Strider to the ropes, and almost resetting the bracket. The matches had amazing adaptation and super great whiff punishes.

This match with iPeru vs BlankaIsElectric grand finals was also great.

I think the folks not getting enough attention at our event currently would be NVRMND who is a really, really good Abigail player and SirRalic who is an incredible Zangief. I think awesome players who are also instrumental behind the scenes would be V4Charlie, Onealskey, Lord_Baine, and Sugarbear. Without those folk I wouldn’t be able to build what we have. There are tons more I could name as well as everyone in our community is focused on building something amazing. From the Tekken side I think people need to keep their eyes peeled for ElNegro. He’s an INCREDIBLE player who will be crushing top 8s in no time. I also believe that LanaDelMaek, BklynExpress and Pan are all incredible Tekken players that should get more recognition than they do. You can actually see who is most active and who wins the most by checking the leaderboards are www.getgoodfgc.com.

Is there anything else that you would like to add?

I think the thing I would want to make sure that’s known about our community is the focus on growth, development, and positivity. We believe in telling players what their shortcomings are and providing them the tools to overcome them. We also focus on making sure everyone is welcome. If you want to be a casual, come out. If you want to be a competitor, come out. If you love games, if you love fighting games, then you belong here. The mentality that we all focus on is something I’m super proud of because everyone in our community reflects that.

Find out more about SLC Bar Fights on twitter @getgoodfgc and https://www.getgoodfgc.com

Check out when you can visit the next SLC Barfights here!