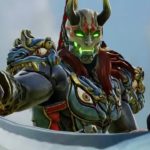 Lolomx is another SC6 World Invitational competitor that has responded to Party Wolf’s tier list call. His left to right ordered tier list ranges from S to D. Consensus on Azwel’s strength shows with him being solely at the top at S.

OK, here is my tier #SOULCALIBURVI tier list, top to bottom and left to right is best to worst.
As stated before, I think the game is overall well balanced, that’s why most of the chars are in B (Balanced) tier.@SoulCaliburCom pic.twitter.com/sveV6oeomw

Be sure to support Lolomx by subscribing to his Twitch channel here.