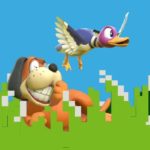 Just a few hours ago, Tetsuya “Raito” Ishiguro tweeted out his Super Smash Bros. Ultimate tier list. Raito is unarguably the best Duck Hunt player on the planet. He’s taken the character to two consecutive top-eight finishes at the Evolution Championship Series and he has recent wins over the 5th- and 7th-ranked Ultimate players (Shuton and Dabuz, respectively). Given his results, it’s not too surprising that he places his own character in the A-tier. However, other than a follow-up tweet saying that he placed Cloud one tier higher than he meant to, Raito hasn’t explained his placings, which means that we can only guess at his reasoning.

It’s also notable that Ultimate’s newest character, Terry Bogard, doesn’t appear on Raito’s list at all. Presumably he feels that he needs to learn more about the character before placing him. You can see Raito’s thoughts about the rest of the cast below.