In the gaming world, “casual” is often an insult. Google “casual gamer” and the first result explains that casuals are “not fully committed to playing a video game at a high level.” Especially in a competitive environment like the Fighting Game Community, some people will consider casual players to be second-class citizens. But these attitudes are at odds with the truth. Without casuals, there would be no community in the first place.

“I don’t play fighting games competitively,” says Briana “Reina” Thompson. “I played [the indie, two-button fighter] Divekick in tournament a few times and that’s about it.” Thompson, who’s been a fan of Street Fighter and Mortal Kombat since childhood, is no budding esports star. She’ll never take her Blanka to Capcom Cup or her Sindel to the Pro Kompetition Grand Finals. But if you’ve watched or attended the Evolution Championship Series, Combo Breaker, Frosty Faustings, Red Bull Conquest, or events run by Eric “Big E” Small, then you’re already a fan of her work. That’s because, when it comes to supporting the community, this community hero is anything but casual. 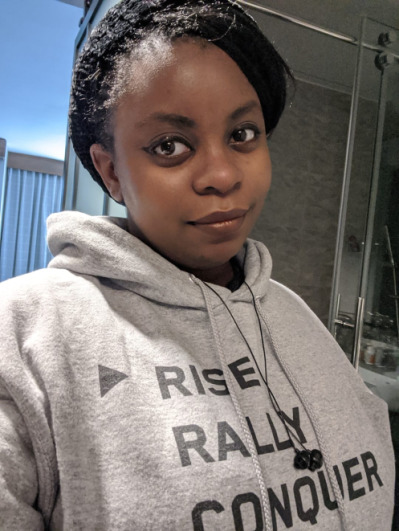 Parts Of The Whole

Thompson’s path started in 2012, when she and several friends drove from their home in Chicago to Las Vegas, the site of the annual fighting game world championships. Being immersed in the community’s biggest celebration had a powerful and immediate effect on her. “I was hooked. I loved the pop-offs, the friends that I met from around the country, the hard work and dedication from the staff.”

What’s more, the experience opened her eyes. She’d already had a love of the games and an appreciation for high-level play. But as she moved through the event, it struck her that Evolution was only possible because of the collaboration, energy, intelligence, and expertise of the FGC at large. “I saw the community as a whole,” she recalls. “Each part of the community has a purpose. We need the staff and volunteers to put the event together to make sure it runs smoothly. We need the players to come and enjoy themselves while playing at a competitive level. We need the commentators to bring the color commentary and the play by plays. We need the broadcast team to bring the event to the people who couldn’t come to the event and still enjoy watching the high-level play…

“When all you know [about the community] is one side, that will be your focus. As an audience member or a player, you pay for an experience. You spend a weekend with like minded individuals that enjoy the same games as you. Their focus is fun and competition. When you switch to another aspect of this community…you look at events differently.”

In that moment, she knew how she would play her own part in the community’s success. She realized that “I care more about organizing the events and bringing people together than playing any individual game.” She started by running brackets at the Ultimate Fighting Game Tournament, a major Chicago-area event that has since morphed into the super-major known as Combo Breaker. From there, she quickly earned a reputation for professionalism, accuracy, and reliability, which opened doors for her at every level of the community. Now, Thompson serves as a community liaison for Evo, the lead bracket manager for Frosty Faustings, co-Tournament Manager at Combo Breaker, and TO at a number of other large-scale events. If you’ve attended one of her tournaments, you probably only saw her as a face behind a desk. But it’s no exaggeration to say that the FGC’s biggest events wouldn’t be the same without her.

Thompson’s place in the community is just as high-stakes as any pro player’s, but her rewards are very different. She’s not after fame, fortune, or the pulse-pounding high of victory. Instead, she’s looking to the future.

In 2017, that future became real to her in a very personal way. That was the year she gave birth to her son, Michael. As a mother, Thompson is playing for something much more important than a trophy or an oversized check. She wants Michael to have a place in the FGC, too. That’s why she’s taken him to events with her and why she’s lined up several of her fellow Chicagoans “to help train him when it’s time to get him on the sticks.” For her, now more than ever, fighting games aren’t just a fun diversion. By doing the work she does, she’s building the foundation for a legacy of caring, participation, and belonging. And by bringing her son along, she’s actively raising the next generation of the FGC. 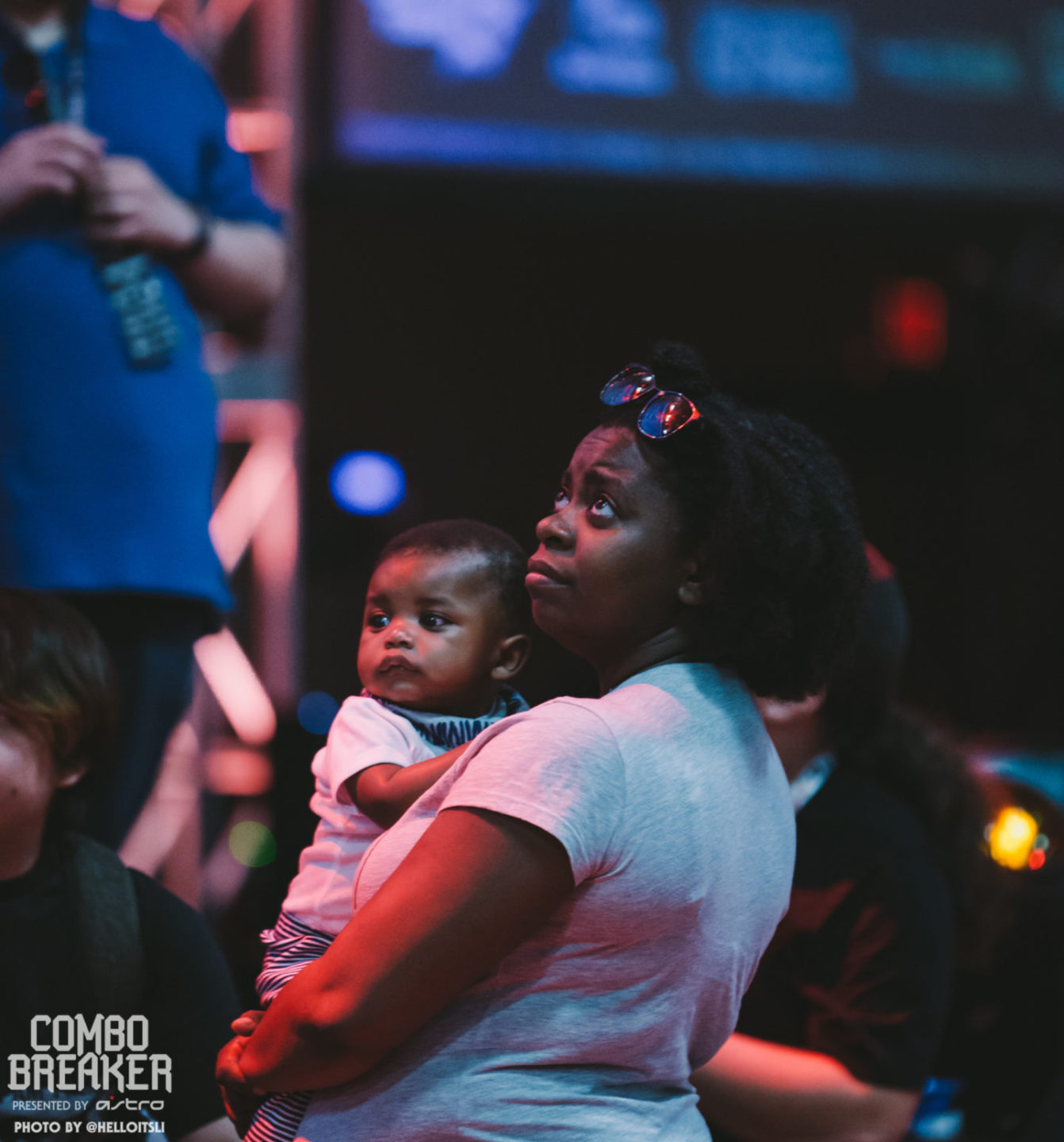 But not everyone in the community has had the same experiences that she has. While the Chicago FGC has given her a home filled with “camaraderie and sense of family,” other parts of the scene have shown a very different face to the world. Over the past year or so, a handful of FGCers have been credibly accused of a wide range of abhorrent behavior. These individuals range from unknown partygoers to top players and community leaders, but from Thompson’s perspective no one gets a pass. “I want to help make the community safer for my son to grow up in,” she says. “I want the women that I work with and befriended over the years to not be afraid to come to an event. I also want the guys who became my friends to be able to speak out on the abuse they’ve endured.”

Even among her fellow TOs, all of this puts Thompson in a relatively rare position. Love is common in the FGC. It’s what draws players in, brings them together, and keeps them from giving up. But Thompson draws on a source of motivation that’s altogether more serious: the belief that she can make her home a better place for the next generation.

For now, Thompson is stuck at home just like everyone else. With no events planned for the foreseeable future, her focus has turned to the bigger picture. She’s part of a group of TOs who are trying to build a community-wide Code of Conduct that will help to protect players and prevent abusers from reaching positions of authority. (Full disclosure: I helped to organize that group.) Reaching that point won’t be easy. Unlike running a bracket, there are no fixed rules for washing a moral stain out of a community. But one thing’s for certain: every time the FGC gets a little cleaner, it’s because of people like her.

In the meantime, she’s keeping up with Jeannail “Cuddle_Core” Carter’s streams and hosting some of her own. Along with the rest of the FGC, she’s closely watching the news to make sure that she knows how the ongoing COVID-19 pandemic will affect the scene. “I wish people understood what it takes to make a larger event run,” she says, reflecting on the past several months of quarantine. “Event directors don’t make millions of dollars running FGC events. As we saw with the emergence of the coronavirus, some of these events may not come back because they barely break even…This is definitely not something to do to make lots of money. You do it because you enjoy it.”

As the FGC continues to grow, it would do well to revise its idea of who’s casual and who’s not. Thompson may not have the flashiest combos or the newest tech, but her contributions are vitally important. Moreover, her commitment to the community is as serious as can be. So if you’re one of the people who appreciates her work, give her a follow on Twitter and Twitch. And when she speaks, listen. The words of a hero are always worth hearing.

Eli Horowitz is a writer and software QA professional who lives in Pittsburgh. His first novel, Bodied, is set in the FGC and is for sale here. Follow him on Twitter @BODIEDnovel for fighting game jokes, memes, stats, highlights, and general positivity.